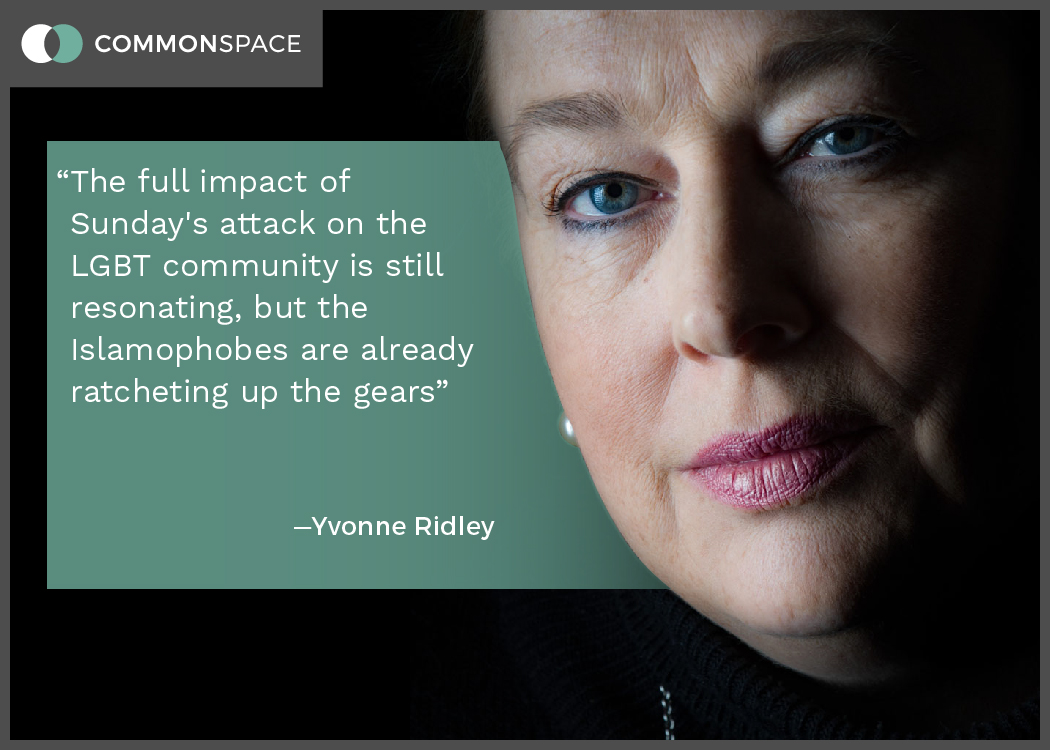 CommonSpace columnist Yvonne Ridley says the grief of the LGBT community is being dismissed in favour of sensationlist, Islamophobic coverage of the Orlando shootings

MUCH of the coverage by the London-based media of the Orlando attack on a gay nightclub is a classic example of the sort of lazy, shoddy journalism we are expected to put up with these days, so I was absolutely delighted when ballsy Owen Jones called time on a live television show because of the narrative being pushed by the presenter.

The British columnist, author and commentator challenged the Sky TV presenter several times when he refused to accept the slaughter in the Pulse nightclub was a deliberately targeted attack on LGBT people. Not only that, Sky's Mark Longhurst went on to insist that Jones should separate the issue of Islamist terror from anti-gay hate. Longhurst was wrong, but not alone, as it was a line pushed hard by the Islamophobic, homophobic media whose front pages were being reviewed.

It does take guts to unclip your mike and walk out of a TV studio which is broadcasting live.

Some media, including the New York Times, initially ignored the fact Pulse was a well known LGBT club popular with the LGBT community; other media went for the least line of resistance and began writing about Muslim, ISIS and spreading more fear and hate with sensational headlines.

Ignoring the fact that those targeted were from a specific community was a sign, I believe, of homophobia itself. The media in its over-simplified narrative did not want to complicate the Muslim terror angle with that fact that the victims came mainly from the gay community.

Unlike Jones, I am not gay, but having lived in Soho for the best part of 20 years I feel as though I have a good understanding of the gay community and count many there as my friends. I moved in shortly after the neo-Nazi nail-bomber David Copeland targeted the Admiral Duncan pub just around the corner in Soho's Old Compton Street in 1999. You didn't have to be gay to realise he was deliberately targeting the gay community as part of his deadly hate campaign which also saw bombs go off in Brick Lane and Brixton to target the Muslim and black communities.

As a Muslim. I'm not trying to exploit this horrendous situation purely for Muslims but I was glad when Jones took his courageous stance.

And similarly, you don't have to be a rocket scientist to realise mass murderer Omar Mateen had launched a homophobic attack on LGBT people enjoying a night out in Orlando, at an LGBT club killing, 49 innocents and injuring countless more. Despite what many American columnists continue to say, this was not an attack on US freedoms and liberties: it was the deliberate targeting of gay people.

As Jones wrote in The Guardian after walking off the Sky TV set: ''I walked off in disgust during a discussion about the massacre: it was an instinctive reaction to an unpleasant and untenable situation. The presenter continually and repeatedly refused to accept that this was an attack on LGBT people. This was an attack “against human beings”, he said, and “the freedom of all people to try to enjoy themselves”. He not only refused to accept it as an attack on LGBT people, but was increasingly agitated that I – as a gay man – would claim it as such''.

Drawing parallels with other minority communities he added: ''If a terrorist with a track record of expressing hatred of and disgust at Jewish people had walked into a synagogue and murdered 50 Jewish people, we would rightly describe it as both terrorism and an antisemitic attack. If a Jewish guest on television had tried to describe it as such, it would be disgraceful if they were not only contradicted, but shouted down as they did so. But this is what happened on Sky News with a gay man talking about the mass murder of LGBT people''.

Sadly this is the sort of media treatment Muslims are subjected to on an almost daily basis; having to listen to so-called Muslim experts discussing Islam without asking any representative Muslims for their views. In fact some media outlets deliberately choose so-called ex-Muslims to talk about Islam which is an odd thing to do. And no, as a Muslim I'm not trying to exploit this horrendous situation purely for Muslims but I was glad when Jones took his courageous stance … and it does take guts to unclip your mike and walk out of a TV studio which is broadcasting live.

I don't see vicars, priests, bishops, rabbis or religious leaders from the Sikh, Hindu or other religious communities rush to release press statements when members of their community commit heinous crimes.

Describing the diversity of the LGBT community Owen also wrote: ''To imagine LGBT people who may have endured distress and internalised prejudice – just because of who they are – spending their last moments in terror as a homophobic terrorist hunted them down is just unbearable. Today, the “we only care about LGBT rights if Muslims are involved” brigade are out in force. As a gay man, I am proud to live in a city represented by a Muslim mayor who has faced death threats for supporting and voting for LGBT people to have the same rights as everybody else. The bigots must not be allowed to hijack this atrocity''.

The other newspaper reviewer was Julia Hartley-Brewer, a TalkRadio presenter and former political editor of The Sunday Express; by the morning after the Sunday evening newspaper review she had received a wave of abuse from all manner of trolls on the social networks, some accusing her of being a homophobe. Just for the record, I worked for some years with Julia and count her as a friend, and I can tell you she is not homophobic but she's big enough and hard enough to defend herself. In fact during the newspaper review she agreed the attack was homophobic as well as an act of terrorism.

As a former Soho resident I was so proud at the way the community and its friends came together to show unity on Monday evening and wish I could be there to show my solidarity. The message to homophobes from Glasgow, London and most major European cities was loud and clear as well as signalling to any other hate groups that the LGBT will not be driven underground by terror. Their actions globally have forced the media to change the narrative of what happened in Pulse and make the media accept that gay people have a right to be recognised as victims of this horrendous atrocity.

The media should not use its headlines and bulletins to whip up hate against one community while ignoring the grief of another.

Meanwhile in the Muslim community we have some tough questions to ask of ourselves as well. Sadly whenever these atrocities occur, carried out by someone with a Muslim name, Islam and the entire Muslim world go through trial by medial. Why, for instance, are we the only religious community that feels it necessary to organise media conferences to condemn the actions of these crazed, disturbed individuals like Omar Mateen?

I certainly do not want to brush aside the scale or horrors of what happened inside the Pulse nightclub, but does public hand ringing by Muslim leaders really do any good, especially when people are still blind with tears of grief and the pall of death and gun smoke still hangs in the air? I don't see vicars, priests, bishops, rabbis or religious leaders from the Sikh, Hindu or other religious communities rush to release press statements when members of their community commit heinous crimes.

This media drive for collective punishment has to stop. The full impact of Sunday's attack on the LGBT community is still resonating and before parents, families, friends and relatives have time to grieve the Islamophobes are already ratcheting up the gears. Donald Trump, for instance, has started spewing hateful words with his indiscriminate attacks on the global Muslim community which is fuelling the anti-Muslim and anti-immigration movements across America and Europe.

The media does have a role to play at times like this and it should not use its headlines and bulletins to whip up hate against one community while ignoring the grief of another. 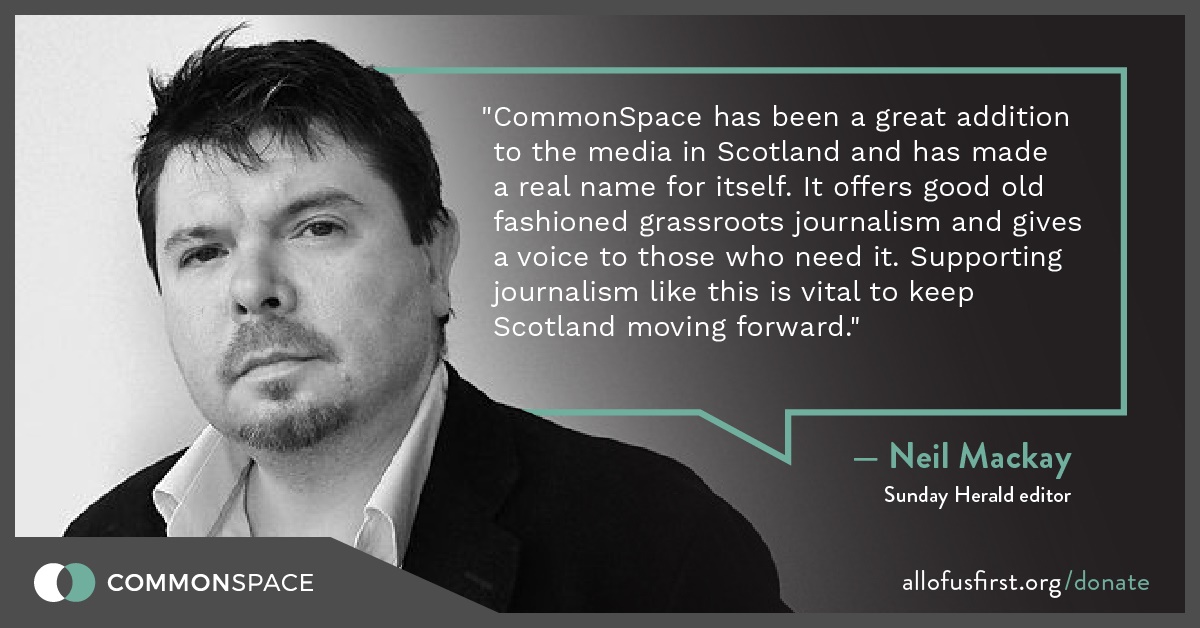