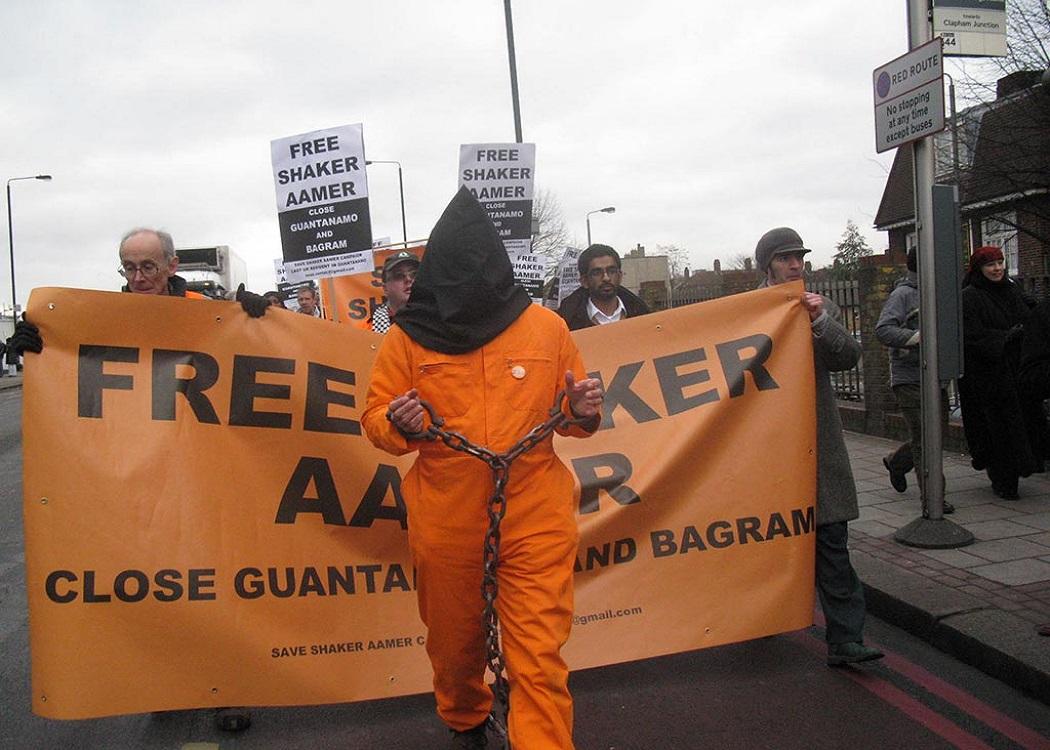 WESTMINSTER journalists apparently have a difficult time trying to get a decent story these days since Labour’s new leader is proving rather elusive, non-communicative and media shy.

So there was great excitement as journalists squeezed into the press gallery inside the British Parliament a few days ago as the UK Government’s opposition leader Jeremy Corbyn prepared to face down Prime Minister David Cameron in their first official exchange at Prime Minister’s Questions.

It turned out to be, in the grand scheme of things, a damp squib. However, had they wanted a good story of dirty dealings, high drama and dark forces all they had to do was venture outside, cross the road and ask a group of campaigners standing on the green why they were wearing orange suits, hoods, shackles and chains.

Many of the 56 have signed an Early Day Motion demanding the release of a man who has become known as the ‘Last London in Guantanamo’.

It’s something the SNP 56 have done and now many of them have signed an Early Day Motion demanding the release of a man who has become known as the ‘Last London in Guantanamo’.

As the motion stands there are probably more SNP MPs than any other group who have signed the EDM so far although I don’t think Saudi-born Shaker Aamer has any connections north of the Border. However, his story carries enough drama and intrigue to provide a script for a Hollywood blockbuster.

His story is one of spies, lies and political intrigue involving some of the most powerful figures in the world. We do know that the British resident and father-of-four has been cleared for release by two successive US presidents and three British prime ministers so the big question is this: Why is Shaker Aamer still a captive?

The question was asked by Greg Mulholland, a Lib Dem for Leeds North West on Friday and the response from junior Foreign Office Minister Tobias Ellwood was this: “The UK Government continues actively to engage the US Government to secure Shaker Aamer’s release.

“No decision has yet been made. Given the need to respect the confidentiality of the process, we cannot provide a running commentary on conversations with the US government.”

Around the same time Ellwood was giving his response, the White House assured me Shaker Aamer’s case was a priority with Barack Obama but still no one from Washington to Whitehall can explain why he remains in custody.

So here we are today, nearly 14 years on, and this man is still being held in Guantanamo without trial and without charge.

In terms of miscarriages of justice, the case of Shaker Aamer must rank up there among the gravest and that is why the SNP 56 are now adding their names to an Early Day Motion which states: “That this House calls on the US administration to release Shaker Aamer from his imprisonment in Guantanamo Bay; notes that he has now been incarcerated for 13 years without charge; further notes that he has twice been cleared for release and transfer, under President Bush in 2007 and President Obama in 2009; supports the call made by the prime minister for his release and return to the UK; notes the unanimous resolution of the House of 17 March 2015 that Shaker Aamer be released; and asserts that the defeat of terrorism will only be achieved by upholding the principle of the rule of law – to the protection of which Mr Shaker Aamer is entitled.”

Here we are today, nearly 14 years on, and this man is still being held in Guantanamo without trial and without charge.

While this lot are usually knocking seven bells out of each other in the House of Commons, here is a cause which plasters over fracture lines and political differences.

But while there is a unity among the political adversaries in the UK it seems the Shaker Aamer case is threatening to open up fault lines within the Obama administration. The US President (who is also commander in chief of the US military), arguably the most powerful man in the world, wants him released and so did Barack Obama’s predecessor George W Bush.

But, as I discovered this week, trying to elucidate a straight answer from the US on the continued plight of the detainee is proving to be uncharacteristically difficult; a bit like trying to nail jelly to a wall, if you will.

This and previous US administrations have been unbelievably forthcoming and shockingly transparent about torture, the methods its military and intelligence people have used in interrogations and the part the US has played in the kidnap, rendition and abuse of those swept up in the War on Terror.

While the British Government still refuses to acknowledge its part in bypassing international law and violating human rights (even though it has shelled out millions in hush money and compensation already to ex-Guantanamo British detainees on condition they drop litigation), the US Government has held up its hands and even released previously classified documents detailing its own atrocious behaviour.

However, when it comes to Saudi-born Shaker Aamer’s case there appears to be a general reluctance to admit anything. Certainly someone or some department in the US is doing its utmost to block his release but trying to find the culprit is like trying to box shadows.

In March, before the arrival of the SNP 56, there was a unanimous resolution passed in Westminster that Shaker Aamer should be released and Corbyn was one of the lead speakers.

He stated: “He has been cleared for release for longer than President Obama has been president. It does not say very much about the power of the US presidency when the president can campaign for election partly on the basis of closing Guantanamo Bay, having specifically ordered the release of those against whom there is no case whatsoever but who have still not been released.”

While there is a unity among the political adversaries in the UK it seems the Shaker Aamer case is threatening to open up fault lines within the Obama administration.

Corbyn went on to say that he and other MPs had held numerous meetings with the Foreign Office over the years and he was “at a loss to understand what is preventing Shaker Aamer’s release”.

The Save Shaker Aamer Campaign (SACC), which holds vigils every Wednesday outside the Houses of Parliament, is now hopeful that with the additional support of SNP MPs, added pressure may help secure his release.

There is an uncomfortable feeling among MPs that dark forces may be at work to keep the detainee inside the world’s most notorious prison. Corbyn hinted at it recently when he asked in parliament: “Is he being held because he knows too much and has seen too much – the hunger strikes, the torture and the brutality?”

I asked the same when speaking to the Pentagon’s press office earlier this week, even suggesting that since the US President was also Commander in Chief (CINC) his orders should be obeyed and not to release Shaker Aamer could be regarded as insubordination by a lower rank.

The response to my questions lacked the sort of clarity I was seeking: “To the greatest extent possible and consistent with our national security interests, detainees will be repatriated, resettled, or prosecuted in federal courts or military commission proceedings.

“DoD quickly acts on all potential detainee transfers, once the interagency finds suitable host countries and have negotiated the appropriate security assurances,” came the reply.

I asked if anyone was directly disobeying the Commander in Chief (CINC) and the bland response was: “Transfers are authorised only after the secretary of defence, in coordination with the interagency, determines that the transfer is in the national security interest of the United States and that the threat posed by the detainees to the United States or US persons or interests would be substantially mitigated.”

So after several days of email exchanges and telephone calls this was the only official response I could get from ‘Gary Ross Commander, US Navy Defense Press Operations Office of the Secretary of Defense’.

There is an uncomfortable feeling among MPs that dark forces may be at work to keep the detainee inside the world’s most notorious prison.

Undeterred, I contacted The White House and after several days of waiting a senior administration official assured me: “The administration has prioritised the Shaker Aamer case.”

But efforts to establish why there had been delays, prevarication and obfuscation from that side of the Atlantic drew a blank.

However I was further assured in a statement: “The president’s entire national security team is engaged in the effort to close Guantanamo and we continue to finalise the plan for its ultimate presentation to Congress.

“The fact is that while we are committed to transferring detainees who are eligible for transfer, we are committed to doing so only under conditions that will mitigate any security risk to the United States and ensure the humane treatment of the detainee.

“Our efforts to establish such conditions, which can vary substantially based on the particular detainee and recipient country, are careful and deliberate, and finalising such arrangements takes time.”

There are those who fear Shaker Aamer will become a ‘forever prisoner’ because he ‘knows too much’. While an extraordinary thing to say, it is a view shared by a diverse, eclectic group of people including Conservative MP David Davis and ex-Guantanamo detainee Moazzam Begg.

During the March debate in the House of Commons Davis said: “Shaker has been a representative [of prisoners] in the disputes in Guantanamo, which may make him more of a target.

“In addition to his own torture, he is said to have witnessed the torture of others, which may be why his release is being withheld… because he would embarrass them.”

Begg said the detainee is certainly a charismatic figure, describing him as: “A powerful speaker who can really influence people and perhaps the US is more afraid of what he would say upon his release than the continuing injustice of his case. it is obvious he has heard and seen things which would embarrass some powerful people.”

Ex-Guantanamo commander Colonel Mike Bumgarner sought help from Shaker Aamer while trying to negotiate an end to the hunger strikes of 2005.

There are those who fear Shaker Aamer will become a ‘forever prisoner’ because he ‘knows too much’.

In a magazine interview, he revealed: “He was treated like a rock star, some of the places we would go in. I have never seen grown men – with beards, hardened men – crying at the sight of another man. It was like I was with Bon Jovi or something.”

2005 was the same year that three hunger-striking prisoners died of asphyxiation and while US officials described the deaths as suicides, calling their demise a form of “asymmetrical warfare”, others, including former US soldiers who were present, say something far more sinister happened and that Aamer was a witness.

Journalist Andy Worthington, a co-director of the We Stand With Shaker Campaign, said: “The Shaker Aamer Parliamentary group which initiated the EDM has such cross party support we can’t think of a single reason why any MP should not sign. Everyone is delighted to see the SNP wholeheartedly get involved in the campaign since the arrival of the 56 earlier this year.”