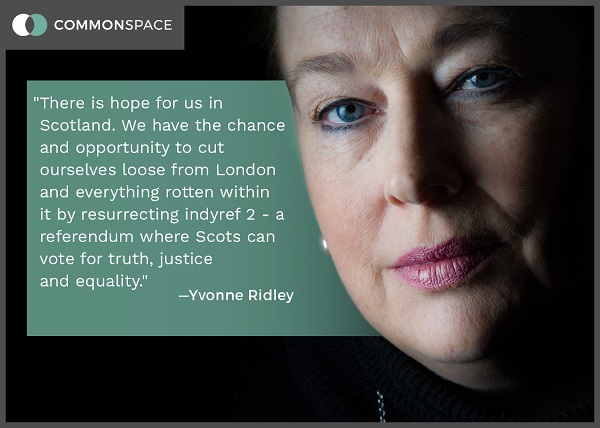 THE strongest case for Scottish independence is being presented this week through the treacherous antics of the so-called establishment in the English capital.

I am, of course, referring to the lies, deceit and dishonesty tumbling out of every corner of Westminster as sleaze and sex pest revelations continue. And, just down the road in the royal residences there are more lies and cover ups as loyal subjects of the monarchy are treated with the same contempt as the growing number of republicans in the UK today.

But first, let’s focus on the shenanigans in the London-based government where moral fibre is as rare as hen’s teeth in the corridors of power. No wonder I’m beginning to think that one of the few people to enter in to the British Parliament with noble intentions was Guy Fawkes!

READ MORE: Priti Patel’s journey from minister to meme: How it all happened

Outgoing International Development Secretary Priti Patel has consistently lied about her so-called family holiday to Israel in which she met countless high ranking officials, generals and political leaders during her August break.

Since news of her visit to one of the most politically sensitive regions in the world leaked out she has issued a series of misleading statements and half truths. Even when put on the spot and asked to give a full account of who she met, when, where and how, she still withheld details of two further meetings.

Every day new revelations about this holiday are emerging and Wednesday was no exception. We learned that she was taken on a sojourn to Syrian land seized and occupied by Israel during the 1967 war. Israeli officials accompanied Patel to the Golan Heights in complete violation of UK Government policy towards the territory since Britain refuses to recognise Israel’s illegal occupation there.

In short, Patel has lied and lied again and then, when put in a tight spot, she has continued to lie about details of the trip in direct violation of the rule book handed to ministers when they take office. Even if she wasn’t aware of its contents her office would be, and she would have been warned of the risks of breaking any ministerial codes.

Patel is either barn door thick or acutely arrogant to have imagined she could get away with having 12 high level visits in Israel without the Foreign and Commonwealth Office and/or Theresa May finding out. Put another way, I doubt she’d have a case for unfair dismissal if the prime minister had decided to sack her on the spot instead of accepting her resignation.

READ MORE: Theresa May under pressure as she loses second cabinet minister in one week

The big mystery is why it has taken May so long. She should not have dithered and should have handed Patel her P45 the moment the first lies came tumbling out. Probably Patel’s biggest mistake – among the many – was not telling May about her meeting with Benjamin Netanyahu, especially when May rolled out the red carpet to the Israeli leader just last week.

The Jewish Chronicle claims May did know about Patel’s meeting in September, which would mean Patel has been caught lying yet again, but Downing Street has dismissed the claims. Why wouldn’t she tell the media that May already knew? And if it was the case, why would May lie by claiming not to know about the high profile meeting? Regardless of the exact truth of the she-says-she-says, has lying just become morally acceptable in Westminster these days?

Only now we are beginning to learn that on 7 September Patel had a meeting with Israeli security minister Gilad Erdan at the House of Commons. No 10 is claiming it only learned of that one on Tuesday. What the hell is MI5 and MI6 doing these days? Was Smiley and his people on holiday from the security and intelligence services on 7 September?

Then there’s a whole raft of others lying and counter lying about minor and major indiscretions of a sexual nature while ministers and MPs scramble over each other like a bucket of frogs.

But there’s more to come. More lies are being casually issued from Buckingham Palace and Clarence House by Her Majesty the Queen and her heir, Prince Charles, over the Paradise Papers which have exposed the great and the good for using sophisticated loopholes to avoid tax on an industrial scale.

READ MORE: Jade Saab: We need to talk about Britain’s relationship with Israel

The Queen took to the TV to talk to her subjects after the death of Diana, Princess of Wales. I would say this latest crisis is much, much worse and Her Maj needs to make another broadcast and pretty damned quick to explain herself.

It’s no use issuing patronising statements about the legality of certain financial schemes on the grounds that we’re all pretty dim and don’t understand these things. I might not have a degree in economics but, like most people, I can spot when something is well dodgy in terms of finance.

The Queen and Prince Charles, as well as scores of other filthy rich individuals, pay extraordinary amounts of money to experts who display fox-like cunning and breathtaking knowledge on exploiting loopholes in tax and legal matters. No one is accusing Good Queen Liz, her son or any of the others of breaking the law but they are stretching it to the maximum.

What I find really distasteful is the fact the prince of Wales issued a statement saying he had no idea where Duchy funds are invested. This is blatantly unbelievable – every one with ultimate responsibility for the financial assets of their organisation is briefed at least once a year by their portfolio manager. That much I do know.

The financial report at this meeting would show where there are losses and an explanation, where there were gains and an explanation and, more crucially, HRH would be given an outline of what investments are being proposed for the net financial year and why. It is the person with ultimate responsibility – in this case the heir to the throne – to give approval.

And for those lick spittle, toadying subjects who cry out: “Where’s your proof, you republican bastard?” I would say go look on the website of the Duchy of Cornwall run by Prince Charles. It proudly boasts: “Throughout his years of stewardship, The Duke has been actively involved in running the Duchy. The revenues from the estate are passed to HRH The Prince of Wales and Duke of Cornwall. The “board” of the Duchy is The Prince’s Council, which meets twice a year and is chaired by His Royal Highness.”

So there you have it in black and white. The Prince sits in on two meetings a year in which revenues are discussed. What I would say is if the future head of the Church of England and future head of state have the ability to so blatantly lie as a secretary of state, and not apologise for lying, then Britain is morally bankrupt.

Forget about corruption, lies and fiddles in the third world or banana republics, what about the example being set to all UK citizens by the Windsor family which obviously sees honesty as bad policy and lies as the norm?

While there’s very little England and Wales can do about this shocking state of affairs unless a republican movement actually moves from an idea to a political party, there is hope for us in Scotland. We have the chance and opportunity to cut ourselves loose from London and everything rotten within it by resurrecting indyref 2 – a referendum where Scots can vote for truth, justice and equality.

I really do not want to be a royal subject under the rule of such a dishonest band as the Windsors and I certainly do not want to be governed by the sleazy, corrupt sex pests who appear to run the UK from Westminster. And if you are happy with the status quo I can only think you’re either a Tory MP or a member of Team Windsor.