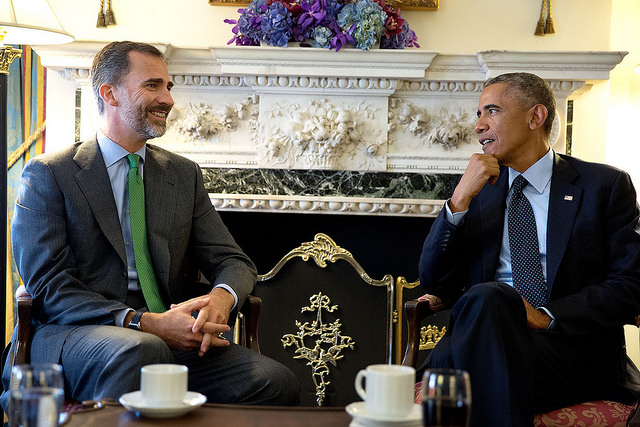 Anti-war campaigner and independence supporter Yvonne Ridley writes from Barcelona after the one-million strong demonstration on La Diada. Ridley examines the response of King Felipe to the push for Catalan independence and compares it to that of Queen Elizabeth – in both cases, the monarchy may need to learn when to yield

ROYALS don’t like referendums and the King of Spain is no exception. However he may well come to regret his intervention in the affairs of the people of Catalonia after his extraordinary outburst following the independence referendum there last year.

Hanging upside down on a towering symbolic wall was the image of a king in the shape of a giant playing card at yesterday’s Diada, Catalans’ National Day.

The ‘royal’ section of the wall, along with another referring to Article 155 of the constitution allowing Madrid to take control of Catalonia, came tumbling down amid roars of approval from the crowds who had gathered in Barcelona on Tuesday.

The message was clear, very clear: Catalonians are still angry about the king’s declaration on October 3 last year when he appeared to have morphed into a mouthpiece for the Spanish Government three days after Catalans held their referendum. Despite his words they vowed to press on with plans to declare independence.

The referendum itself was marred by unprecedented scenes of police violence on unarmed members of the public. The authorities announced on Wednesday [12 September] that some complaints against certain police officers will be investigated. The actions of eight officers in particular have come under scrutiny which could result in criminal charges.

The reason for the king’s growing unpopularity in Catalonia stems from comments he made in which he appeared to endorse the actions of the police and said their response was not disproportionate despite the use of batons and rubber bullets.

Catalonia’s president Carles Puigdemont, who is now in exile, said at the time: “The king endorses the discourse and policies of the government which have been catastrophic for Catalonia and deliberately ignore the millions of Catalans who do not think like them.”

King Felipe had accused the Catalan authorities of attempting to break “the unity of Spain” and said their push for independence was jeopardising Spain’s social and economic stability. During a rare television address he called the Catalan government’s actions as “an unacceptable attempt” to take over Catalan institutions.

READ MORE – Aamer Anwar speech to Catalonia’s Diada in full: ‘Independence is your cause and you do not walk alone’

He said that Puigdemont’s government had placed itself outside democracy and the law. The king ignored the fact that more than 900 people were injured when Spanish police attempted to stop the referendum by raiding polling stations, beating would-be voters and firing rubber bullets at crowds.

Despite the Spanish authorities’ attempts to stop the referendum, which both the government and the country’s constitutional court had declared illegal, 2.26 million of Catalonia’s 5.3 million registered voters took part. According to the Catalan government 90 percent of participants voted for the region to become independent.

It is almost inconceivable the British monarch – known in some quarters as Elizabeth the Silent – would be as outspoken over Scottish ambitions for independence, although it is now an open secret that she wanted Scotland to remain in Britain during the referendum campaign.

She waded in to the political domain addressing the nation from her Balmoral estate in Scotland saying: “Well, I hope people will think very carefully about the future.” Always careful to portray a neutral stance, Elizabeth II, the longest reigning monarch in history, usually appears to be devoid of partisan opinions.

While she does have weekly meetings with the British Prime Minister there are no written records of the private meetings and both parties ensure the topics discussed are never disclosed, although there have been a few occasions when her political views have slipped out.

In the aftermath of the news that Scotland would be remaining part of the union the then Prime Minister David Cameron revealed how the Queen had “purred down the line” after he informed her of the referendum result.

After watching the royal wall come tumbling down in Diagonal in the heart of Barcelona on Tuesday, I imagine the Spanish king will be wishing he had remained silent. No doubt Queen Elizabeth would also do well to keep her views to herself when Scotland holds its next referendum on independence.

Perhaps both Spanish and British royals need to be reminded of the events which brought about American Independence in 1776. During the bicentennial celebrations in Philadelphia in another uncharacteristically indiscrete moment, the Queen revealed: “We lost the American colonies because we lacked the statesmanship to know the right time and the manner of yielding what is impossible to keep”.

As both independence movements gain in momentum it is clear that both the British and Spanish governments and their royal families need to be prepared to “yield what is impossible to keep.”