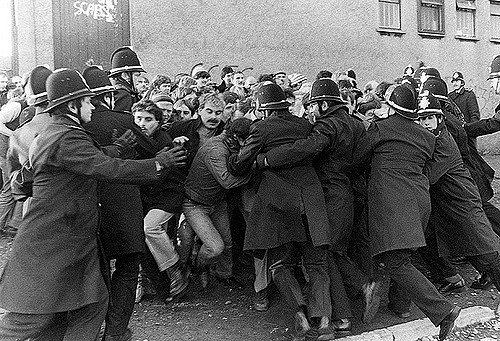 FEW were surprised when the Westminster government ruled out any sort of inquiry into the Battle of Orgreave during the 1984-85 miners' strike.

It's a classic case of the British establishment closing ranks to stitch up the working classes, and this Tory government will do all it can to protect those who served the Tories under Margaret Thatcher.

This is all the more reason for Holyrood to allow a Hillsborough-style inquiry into the policing of the 1984-85 miners' strike in Scotland when nearly 500 Scottish miners were handed convictions that many of us feel were politically motivated and are therefore unsafe.

The Holyrood government under Nicola Sturgeon needs to show it is better than the one in Westminster when it comes to putting people before politics.

The Holyrood government under Nicola Sturgeon needs to show it is better than the one in Westminster when it comes to putting people before politics, especially in cases of injustice as great as those which happened during the miners' strike.

Quite why Scottish ministers have repeatedly refused to order an inquiry into the dispute is beyond me and if it's just because Labour appears to have taken the initiative on this, then so what? If someone shouts "fire" you don't ignore the cry because of petty party politics and differences.

There is a very strong possibility that some, if not all, of the Scottish miners were given criminal convictions because the police lied wholesale. They did it during Hillsborough, and it seems churned out and falsified documents on an industrial scale during Orgreave.

It is quite clear perverting the course of justice to protect their own was something deemed acceptable in Thatcher's Britain.

Not all of us agree with every single decision taken by the SNP but, for the sake of the drive towards independence, we are prepared to take a deep breath and go with the flow … but there are some lines that cannot be crossed and one is the wholesale defamation of the mining community.

Especially in cases of injustice as great as those which happened during the miners' strike.

There might not be many working miners left in Scotland thanks to brutal Tory policies, but the DNA carries on through the generations and, as the daughter of a coal mining family, I can say that the anger and pain of the injustice heaped upon our communities never goes away.

The coal dust running through my veins might come from the Durham coalfields but geography matters not. I want to see justice delivered to my brothers in the Scottish mining communities as much as I want to see the Yorkshire miners of Orgreave have their inquiry. Under the Tories it ain't going to happen south of the Border but it damn well should in Scotland.

I've no doubt the majority the of SNP's Westminster MPs supported the parliamentary motion in London calling for an inquiry into Orgreave, but as far as I can gather this Scottish Government – which was not in existence at the time of the strike over pit closures – says it has "no plans to hold an inquiry, either into the conduct of the police or alleged wrongful criminal convictions, relating to the 1984-85 miners’ strike".

It appears only Chris Stephens has called for a policy shift and has written a letter to Michael Matheson MSP, cabinet secretary for justice, asking him to consider holding an inquiry into policing miners, arrests, dismissals and miners who lost out on redundancy pay, during the '84/85 strike in Scotland.

I want to see justice delivered to my brothers in the Scottish mining communities as much as I want to see the Yorkshire miners of Orgreave have their inquiry.

And if there is no inquiry then perhaps another option on which Sturgeon could act is by issuing pardons to the convicted miners just like those her government issued to gay men punished by the courts before laws against homosexuality were scrapped. There was much jubilation when Matheson announced plans to pardon men convicted of same-sex offences under old legislation.

The SNP is accused these days of forgetting how to fight social injustice – a pardon or an inquiry for our miners would silence the critics while reminding those south of the Border than when it comes for standing up to injustice Scotland leads the way.