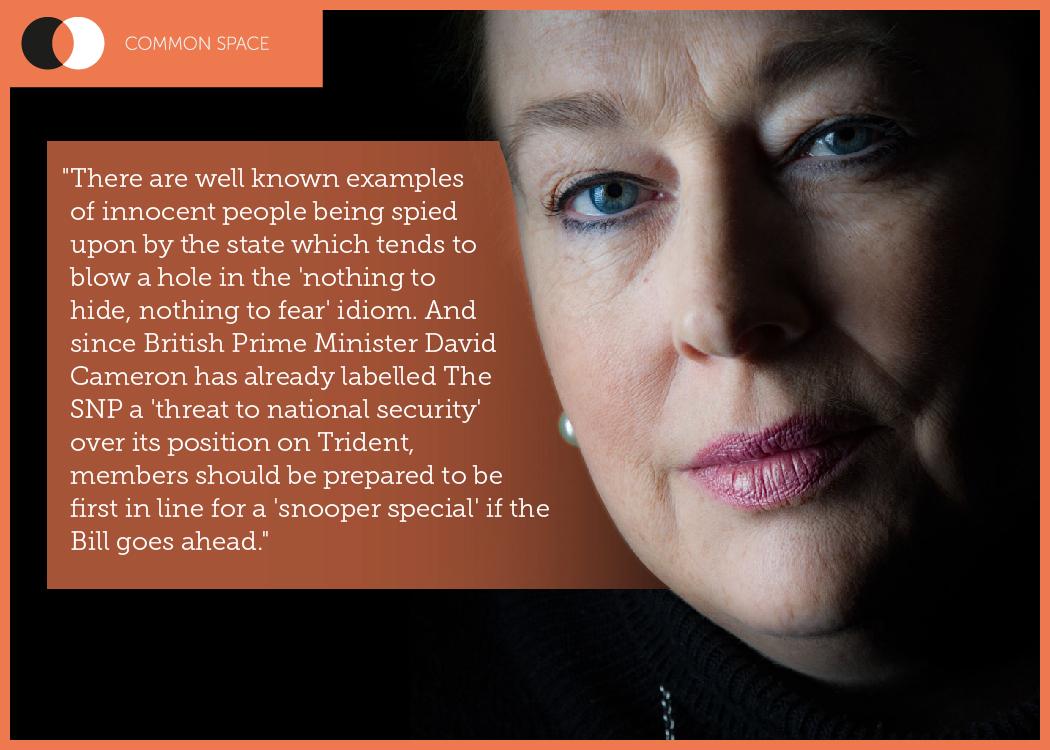 Known to us mere mortals as the Snooper’s Charter, it is probably one of the most baffling and toxic pieces of legislation to be considered by the Westminster parliament’s Public Bill Committee.

Perhaps, in the wake of the Brussels terror attacks, committee members should be asking: “Will this Bill stop a similar terror attack in Britain?” The answer is ‘no’, and more alarmingly if passed into law it could probably end up protecting terrorists instead of exposing them.

Known to us mere mortals as the Snooper’s Charter, it is probably one of the most baffling and toxic pieces of legislation to be considered by the Westminster parliament’s Public Bill Committee.

So all of this makes the SNP’s decision to abstain from voting against the UK Government’s controversial ‘Snooper’s Charter’ difficult to understand. The SNP has already acknowledged the IP Bill is riddled with problems, and while few would dispute the security services needs to update their digital fight against terrorism and serious crime in the 21st century, quite why the SNP didn’t draw up its own charter is incomprehensible.

After all, as more power is devolved – and now that the renewed possibility of independence is already up for discussion this summer – Scotland will have to develop its own electronic defence systems instead of placing its trust and reliance on the intelligence community south of the border.

The trouble is Theresa May’s Bill, in its present form, is generally incomprehensible to the public who still seem to be blissfully unaware her charter would give the intelligence services the right to mass surveillance.

Of course, there are those naive souls like my 89-year-old mum who trot out the tired old saying: “If you’ve got nothing to hide, you’ve got nothing to fear.” But we know that isn’t true. For example, we now know the Metropolitan Police spied on Doreen Lawrence and her family in an attempt to smear them and undermine their fight for justice over the death of teenager Stephen Lawrence.

So all of this makes the SNP’s decision to abstain from voting against the UK Government’s controversial ‘Snooper’s Charter’ difficult to understand.

Earlier this month a senior policeman was allowed to retire and avoid disciplinary charges over the alleged plot to spy on the Lawrence family. This came after the Independent Police Complaints Commission (IPCC) held a two-year investigation which concluded there was a case to answer for misconduct if the officers involved were still employed by the force.

Neville Lawrence said it was “wholly wrong” that the Metropolitan police had permitted former commander Richard Walton to retire from his post as the head of the Met’s counter-terrorism command. Once again, the Lawrences have had justice denied.

The IPCC investigation was launched in 2014 after a Home Office-commissioned inquiry reported that police had been involved in a plot to collect “fascinating and valuable” intelligence from an undercover officer. Imagine the damage that could be done if forces like the Met were given access to blanket surveillance of people’s electronic activities.

There are other well known examples of innocent people being spied upon by the state which tends to blow a hole in the ‘nothing to hide, nothing to fear’ idiom. And since British Prime Minister David Cameron has already labelled the SNP a “threat to national security” over its position on Trident, members should be prepared to be first in line for a ‘snooper special’ if the Bill goes ahead.

The trouble is Theresa May’s Bill, in its present form, is generally incomprehensible to the public who still seem to be blissfully unaware her charter would give the intelligence services the right to mass surveillance.

If the Brussels terror attacks have taught us anything it is that people and their governments need to trust one another and create an atmosphere where there’s a balance between privacy concerns and national security.

The lack of trust between the Belgian authorities and sections of the muslim community in Brussels enabled one terror suspect to remain free for four months after his alleged role in the Paris attacks.

Journalist and computer security expert Kevin Cahill, who is among those to give evidence before the committee in Westminster, said: “We are told that the purpose of the Bill is to assist in the fight against terrorism, serious crime and paedophilia, in the digital age. It is impossible to see how the fight against terrorism is to be assisted by the government spying on all of us, when what is needed is the opposite.

“We need a Bill that recognises and reinforces our rights, not dilutes them, a Bill which trusts us, the people, to be, as we always have been, the frontline against our enemies and the best soldiers of all in the fight against the current Daesh type of terrorism. Instead we are to be spied on by our own government.”

Cahill also throws doubt on the UK’s capability of mass surveillance since. According to him: “No one has ever written software for the kind of bulk collection implied in the Bill. That is a wholly critical unknown that should have been worked out long before the Bill was sent to parliament.

Surely it would be prudent for the SNP to draw up their own charter; one which ordinary people could comprehend and one that maintains trust between government and the people.

“To have incorporated a wholly fanciful ‘mass surveillance wish list’ and to send it to parliament effectively uncosted as this is, is totally irresponsible.”

But perhaps the most chilling observation so far is that around nine per cent of the UK’s population do not use electronic communications and have no reliance on mobile phones or computers.

“It won’t take terrorists very long to work out the ‘blind spot’ in the system, and avoid mobiles and computers altogether resulting in the IPB inadvertently creating a safe haven for terrorists,” added Cahill.

The SNP’s justice spokeswoman Joanna Cherry QC MP said after the vote: “Today we abstained and said we would work for this Bill to be significantly amended to address our concerns and those of other parliamentarians, civil liberties groups and technology companies. We made it clear that if our concerns are not addressed, we reserve the right to vote against the Bill in the later stages of its passage through Parliament.”

Surely it would be prudent for the SNP to draw up their own charter; one which ordinary people could comprehend and one that maintains trust between government and the people.

Meanwhile it appears Theresa May has has not entered into the spirit of her own charter. When the Independent newspaper tried, under the Freedom Of Information Act, to gain access to the contents of the home secretary’s search engine the request was denied.

Quite why she didn’t want to share her browsing history with the rest of the UK isn’t known but if the IP Bill goes ahead police and security services will have access to all of ours.