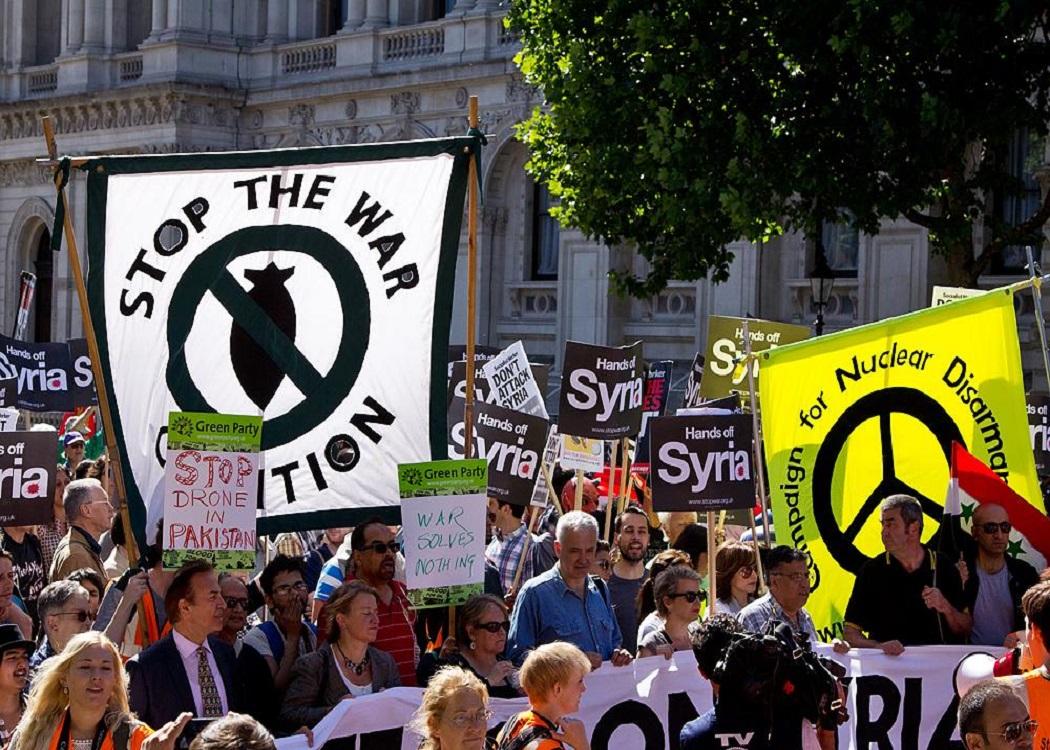 IT IS incredible that an internationally famous movement like Stop the War which brought together the broadest coalition of peace activists drawn from all sections of multicultural Britain is now coming under fire from a loose gaggle of disgruntled career politicians.

They seem to have forgotten that at the height of its influence Stop the War (STW) brought two million people onto the streets of the English capital in February 2003 to protest about the impending and illegal invasion of Iraq.

More than eight million across the rest of Europe, many inspired by STW, rallied in their own capitals, towns and cities and in Glasgow, 100,000 marchers forced Tony Blair to leave a Labour party conference early as they headed towards the meeting.

I have not always agreed with the movement, but on the night of 7 October 2001 I swore that I would join its ranks – if I survived being bombed by Britain and America.

I have not always agreed with the movement, but on the night of 7 October 2001 I swore that I would join its ranks – if I survived being bombed by Britain and America.

Held as a Taliban prisoner, I sat in my prison cell in Kabul as more than 50 cruise missiles rained down on the Afghan capital that night when Bush officially launched his War on Terror.

Although I’d covered conflicts before it was always from a safe distance. I was detached enough not to appreciate the full terror of war but being bombed by your own country adds a new dimension I’d not experienced previously.

Cruise missiles can be felt and heard from 20 miles away so you can imagine the sheer terror I experienced trapped in a Taliban prison cell with nowhere to run and nowhere to hide as these massive weapons of death and destruction landed within a few hundred yards. Suddenly, the scary-looking guys with big beards and big turbans who were guarding me no longer seemed that frightening.

Within a few weeks of being released I told my story from a STW platform in Trafalgar Square before 60,000 people about the futility of the war in Afghanistan.

While I would describe myself as a peace activist, like Jeremy Corbyn I’m not a pacifist or anti-West or anti-American but lazy journalists and the neocons will try and conflate it all into one convenient slur.

Since then I’ve shared many platforms with a whole raft of politicians and activists to protest against the war in Iraq, Afghanistan and the never-ending injustices launched on the Palestinian people, especially the brutal wars in Gaza which have happened in the last decade.

It has not changed its aims or its ideology since those early days and the leadership looks pretty much the same, although the death of Tony Benn still leaves a huge vacuum.

My STW involvement – not my support – was interrupted by the unfolding war in Libya and I still think Western intervention was the right thing to do having travelled the length and breadth of the country before and during the fall of Muammar Gaddafi.

He would, in my opinion, have committed genocide on his own people in order to remain in power and I believe the same of the Syrian leader Bashar al Assad. I believe western intervention should have happened when the brutal dictator began using chemical weapons but that’s another story for another time.

Either way, both the Libyan and Syrian people have been let down by failed Western foreign policies but this article is primarily about the witchhunt on the Stop the War coalition which has existed successfully since its launch in September 2001.

It has not changed its aims or its ideology since those early days and the leadership looks pretty much the same, although the death of Tony Benn still leaves a huge vacuum.

And while Hilary Benn has some of the eloquence of his father, he has inherited neither his compassion nor integrity as he showed when he gave his undiluted support to the Tory government over the bombing of Syria.

With Iraq and Afghanistan, STW has been proved right about the futility of war; millions of dead, injured, widowed and orphaned on the basis of a tissue of lies and dodgy dossiers from Tony Blair and his government stand testament to that.

Despite huge turnouts and UK-wide protests, the mainstream media has – until now – ignored the movement. Even during the two million march only the London-based Guardian newspaper gave it front page coverage. So why now is it making headline news?

Well there’s another war erupting: this one is against the Labour leadership and, more specifically, Jeremy Corbyn and what he has come to represent.

Despite huge turnouts and UK-wide protests, the mainstream media has – until now – ignored the movement. Even during the two million march only the London-based Guardian newspaper gave it front page coverage. So why now is it making headline news?

He has the largest mandate of any Labour leader, no one has been able to draw in as many new members as he and there isn’t a politician in parliament who can draw in the crowds of young people the way Corbyn can.

The Tory government is beginning to wake up to the fact that there is a new style of politics in town these days which could cost it dearly in the next elections and the Tory Lites or Blairites in the ranks of Labour in Westminster are also fearing for their long term futures as career MPs after seeing the demise of their Blairite colleagues in Scotland.

Those who inhabit the Westminster bubble are so out of touch with what is happening on the ground in Britain that they missed the annihilation of Scottish Labour and the Liberal Democrats until the results came in, and failed to predict the rise of the SNP or the tidal wave that would sweep Jeremy Corbyn into power as the Labour leader.

Even now they think Scottish independence is an issue which is dead and buried and can not see the revival of political interest in Scotland inspired the Corbynista youth movement south of the border.

Despite all of this they again failed to predict the Oldham by-election result which saw Labour seize an even bigger chunk of the vote than when it was held by the late, great and much loved Michael Meacher.

Even some of the Blairite MPs clinging on to power told journalists they secretly hoped Oldham would go to the far right Ukip party because it would bring about the fall of Corbyn.

As Tariq Ali, one of the founder’s of STW, observed: “No opponent in the Conservative party has ever aroused such fixity of hatred and rancour as their newly elected leader.

Tory Lites or Blairites in the ranks of Labour in Westminster are fearing for their long term futures as career MPs after seeing the demise of their Blairite colleagues in Scotland.

“The bile is reserved for those who refuse to abandon social democracy. Realising that anti-austerity arguments are popular, the scoundrels have switched to ‘patriotism’, to defence issues, to the safety of the realm, sacralising the ridiculous Trident missiles in the process.

“A serving general is wheeled on to breakfast shows to suggest that if Corbyn is elected the British Army might mutiny. Since Corbyn is a founder member of Stop the War, the propaganda assault is essentially designed to weaken and destroy him.”

Those MPs who’ve launched vitriolic and misleading attacks in the media include the modest quartet of Chuka Umunna, Tristram Hunt, Michael Dugher, Caroline Flint and the equally modest Emma Reynolds (and let’s face it, all have much to be modest about).

They have been wrong about all of the wars Britain has fought since 9/11 and the War on Terror, and all face a battle to remain in their constituencies if the massive influx of new members start holding them to account. They urged Corbyn to pull out of the Stop the War Christmas dinner on Friday night and attacked his links with the group.

Reynolds was even caught red handed telling outright porkies to the BBC when she claimed STW had blamed the Paris massacres on western military interventions since 9/11, adding that the group had compared Daesh with the international brigades who fought fascism in 1930s Spain.

This was based on two articles written by bloggers which were withdrawn from the STW site; in addition, the leadership disassociated itself from the contents.

Normally the anti-Corbynistas get a straight run and are left unchallenged by the BBC to say what they want but Reynold’s misleading statements were exposed seconds later when Chris Nineham, one of the founders of Stop the War, told the BBC that she was telling “untruths” and was engaging in “tittle tattle and smears”.

It’s no wonder these neocons dislike Corbyn, the Corbynistas and the Stop the War coalition so much, but the big question is: what on earth are they doing masquerading as Labour MPs?

He then came up with a few facts that left Reynolds tongue-tied and unable to answer back with a coherent argument.

STW later issued a statement saying it was coming under an “unprecedented attack” from Labour MPs and others opposed to Corbyn’s leadership of the party. It said its views were now “being routinely misrepresented by the Tory government, the right of the Labour party and sections of the media”.

Those Labour MPs and peers launching attacks on Corbyn and Stop the War do have several other things in common – many are members and/or officers of the controversial Zionist group Labour Friends of Israel, and some earlier this year attended a PS250-a-head dinner organised by major arms dealers and their supporters.

It’s no wonder these neocons dislike Corbyn, the Corbynistas and the Stop the War coalition so much, but the big question is: what on earth are they doing masquerading as Labour MPs?

Could these war mongering politicians be running out of ammunition?