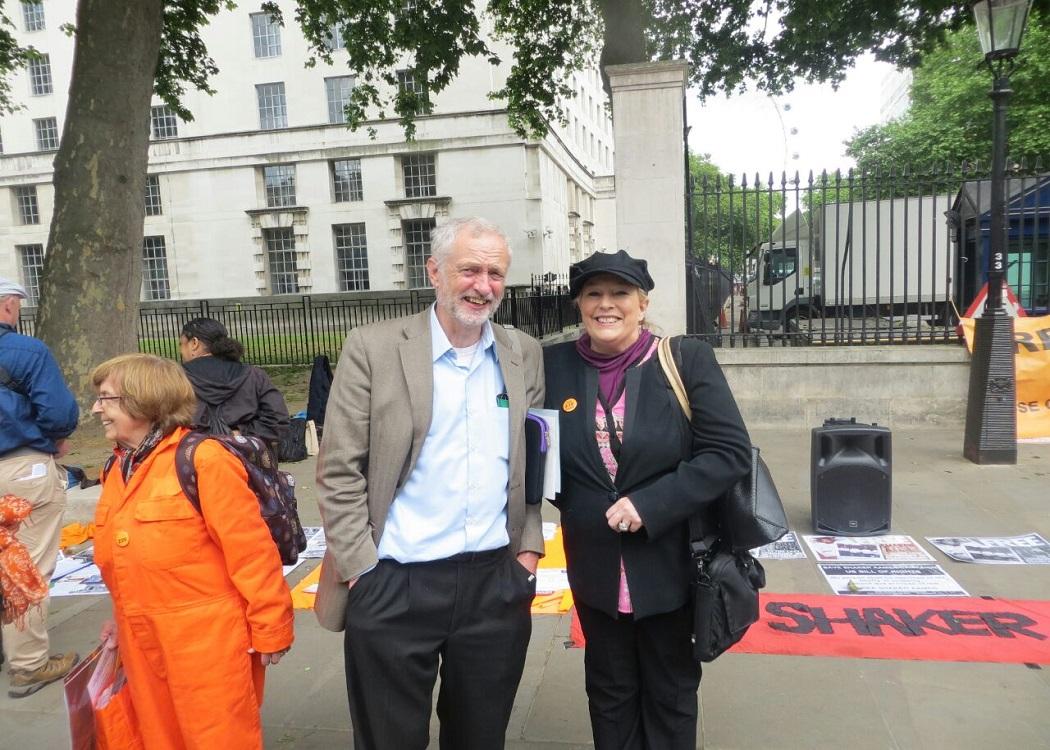 I MET UP with Jeremy Corbyn in London literally two minutes after the Labour leadership nominations had closed. He was happy having just squeezed in ahead of the deadline to become a contender.

Despite the media frenzy over his ‘last gasp’ candidacy and demand for interviews, Corbyn made time that day to support members of the Save Shaker Aamer Campaign outside Downing Street.

The pressure to kickstart his campaign must have been enormous but he made everyone there feel valued as we delivered yet another petition to the prime minister demanding Shaker Aamer, a father of four, be returned from the US-run gulag.

The sneering, snidey metropolitan elite; the Blairites, the journalists sitting in their ivory towers looking down on the rest of us plebs and other political observers and hangers on just can’t understand the ‘Corbyn Effect’.

We would have understood if he hadn’t joined us in our calls for freedom for the ‘Last Londoner’ in Guantanamo, but this is what makes Corbyn so special – he genuinely cares about the causes he commits to.

Many of the causes are not popular nor do they attract the mainstream media but it matters not to Corbyn who is genuinely a really nice guy.

Corbyn is the longest serving MP of the leadership wannabees quartet, having arrived in Westminster in 1983 – the same year as Tony Blair.

On the day he was nominated, the Islington North MP said: “I fully acknowledge and recognise that those colleagues who nominated me, MPs who nominated me, may not necessarily agree with me on the pitch I’m taking or my views on many things, but they also felt there needs to be a full debate on policy in the party.”

That was last month and in that time this ‘last gasp’ candidate and no hoper has been propelled to the head of the field in a campaign which has left the occupants of Westminster bubble dazed and confused (yet again).

The sneering, snidey metropolitan elite; the Blairites, the journalists sitting in their ivory towers looking down on the rest of us plebs and other political observers and hangers on just can’t understand the ‘Corbyn Effect’.

And now they are doing everything in their power to destabalise the outsider’s campaign just as they did with the SNP – they resent anyone who dares to think they can be involved in the government while holding beliefs outside the norm of the London-controlled political parties.

There is a real buzz on the streets which is why Corbyn is packing them out in halls and community centres throughout the UK.

And Corbyn with his anti-austerity policies, support for Palestine and call to re-nationalise the railways has done just that. Like the Scottish National Party, people are being put before politics and youngsters are being enthused and invigorated by this new brand of politics.

There is a real buzz on the streets which is why Corbyn is packing them out in halls and community centres throughout the UK.

Until recently, the metropolitan elite thought they could control us mere mortals through the mainstream media by using the politics of fear and greed, but like the little boy who cried “wolf”, the effect is wearing thin. (Now that it has said it’s backing Yvette Cooper, I’m waiting for The London-based Guardian newspaper to say Britain may lose the pound if Corbyn wins!)

The truth is Corbyn has a new message, something different to say from the rest and people want to listen.

Yvette Cooper made the schoolboy howler in one of her recent speeches when she said of Corbyn: “.. Jeremy is offering old solutions to old problems, not new answers to the problems of today.”

However, she is the one who is out of date. She failed to wake up to the signs north of the border which saw Labour all but destroyed in the last General Election. She failed to see that the Scots are re-engaged with politics because of the progressive politics of the SNP and that the political fever has now spread.

Corbyn may be a veteran but he has his finger on the pulse of street politics; all those meetings in small village halls over the years while Cooper and co sat with thinktanks and focus groups, (developing Torylite strategies) are now beginning to pay off.

While remaining loyal to his socialist roots, he has tapped in to the mood of Britain’s new generation with his down-to-earth, kind and caring politics.

The right wingers call it the politics of the “loony left” but that’s only because they’re still living in enclaves where the greed-is-good gene has been implanted in their psyche – a legacy of Thatcherism. Out of touch with ordinary people they have no idea how refreshing are the politics of Corbynomics.

Now he is in Scotland charming the crowds here and while many of us do hope that Corbyn becomes the next Labour leader he should accept that his beloved party is finished north of the border.

Corbyn hasn’t changed but Labour has and its decision to move to the right has earned it the name Torylite in some circles and Red Tories in others. Some of the Blairites and New Labour supporters might be “bored” by Iraq but the issue is still alive and haunting many people today; it has come to symbolise just some of the injustices of the 21st century which is why news of the much delayed Chilcot Report causes so much anger .

Now he is in Scotland charming the crowds here and while many of us do hope that Corbyn becomes the next Labour leader he should accept that his beloved party is finished north of the border. Scottish Labour isn’t in intensive care, Jeremy – it is in the morgue next to the Conservatives and Lib Dems.

Labour, along with the Liberal Democrats and Conservatives, were all but wiped out in Scotland in May’s General Election when the SNP claimed 56 of 59 seats in the country and there’s more woe heading their way as the SNP prepares to take Holyrood in the May 2016 elections.

This does not mean Scotland has become a one-party state – but it is without an effective opposition at the moment.

The truth is the SNP rolled out an agenda in Scotland when it came to power and many of its policies – similar to Corbyn’s – have already been put into practice. English voters are already looking north and asking why they can’t have free university education, free medical prescriptions and travel for OAPs like their Scottish neighbours.

The SNP has yet to deliver on its anti-austerity and anti-Trident policies and will need full Scottish independence to realise the ambitions of many Scots who want a nuke-free, Westminster-free country with a re-nationalised mail service and ring-fenced protected NHS.

Talk of independence might be high on their agenda for Venezuela, Cuba and Palestine but they remain silent over the SNP’s ultimate goal to be cut free from Westminster.

And this is where we have to part company with some of the Corbynistas because the one thing they will not fight for is an independent Scotland. Talk of independence might be high on their agenda for Venezuela, Cuba and Palestine but they remain silent over the SNP’s ultimate goal to be cut free from Westminster.

If Jeremy Corbyn becomes Labour leader he and his supporters will change the political landscape in England for the better but he must not confuse the goodwill and a solidarity he received in Scotland this week with anything else.

It was just for him and not the late, unlamented Scottish Labour.