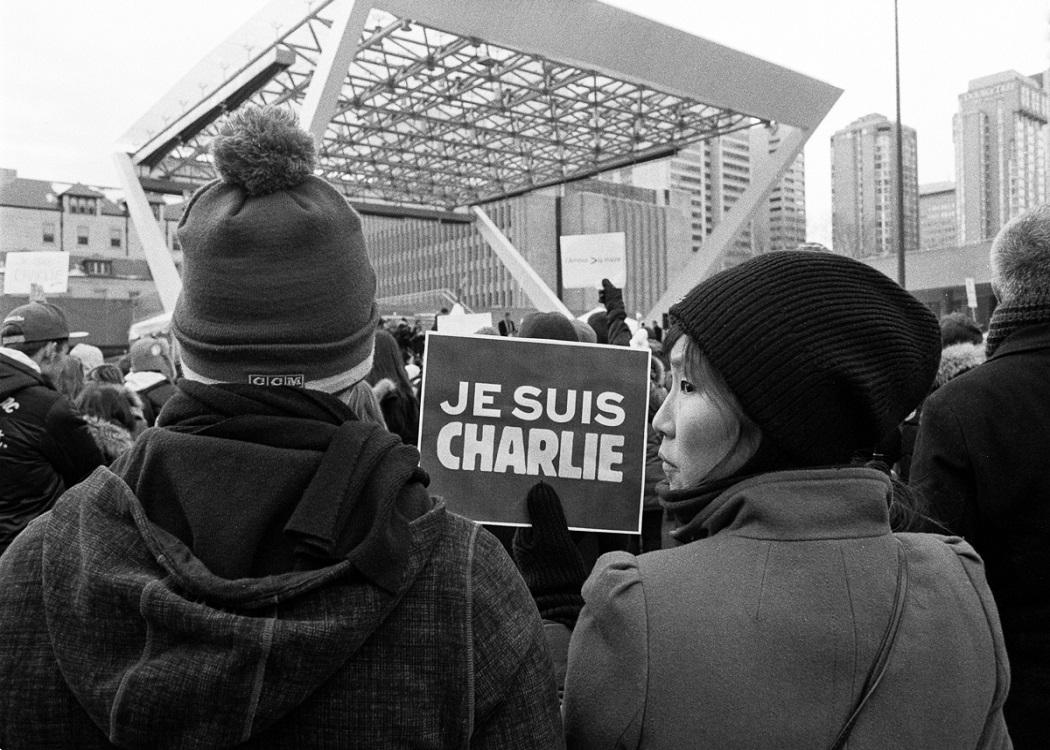 FREEDOM OF EXPRESSION is a concept highly prized around the world and one might have thought it was a universal value judging from the amount of world leaders who took part in the Paris march following the massacre of journalists and cartoonists working at the Charlie Hebdo offices.

For the last few days I’ve taken part in a lively international media conference on the subject of press freedoms and much of the debate focussed on the globally celebrated “Je Suis Charlie” campaign in France.

Despite reservations over the use of cartoons depicting Islam’s founder, the Prophet Mohammed, aspiring Pakistani student journalists at the Institute of Communications Studies based in the University of Punjab tended to agree that free speech and freedom of expression was worth protecting.

The cries of “liberty, equality, fraternity” are now beginning to ring hollow in France where the powerful Boycott, Divestment and Sanctions (BDS) movement has been criminalised by a French court.

Perhaps one of the hottest issues focussed on what was perceived as Western double standards and the demonisation of the Muslim world by nations who wanted to bring peace to the Middle East and Asia via imperialistic wars, weapons and bombs.

Just as the conference drew to a close in Lahore on Wednesday evening, I received a text message from a friend in Scotland informing me that the country that prides itself as a world leader in free speech has now basically banned one of the most powerful boycott movements launched by ordinary citizens.

The cries of “liberty, equality, fraternity” are now beginning to ring hollow in France where the powerful Boycott, Divestment and Sanctions (BDS) movement has been criminalised by a French court.

Quite what the Pakistani students would have made of this, I’m not quite sure but it seems free speech in France is not a right to be enjoyed by everyone – it seems some citizens are more equal than others.

If tomorrow you choose to wear a T-shirt with the message ‘Boycott Israeli Goods’ on it and wander down the Champs Elysees be prepared to be arrested and put through the courts. The French state has chosen to turn such activists into criminals.

In fact, anyone who shows support for the Palestinians and dares to speak out against the crimes committed routinely and with impunity by Israel against the oppressed people of the occupied West Bank and Gaza Strip risk being criminalised.

If tomorrow you choose to wear a T-shirt with the message ‘Boycott Israeli Goods’ on it and wander down the Champs Elysees be prepared to be arrested and put through the courts.

Israel has now turned to its friends in government to crack down on the highly effective BDS movement having failed miserably to win the hearts and minds of ordinary citizens around the world. You see most ordinary people can see the brutal military occupation for what it is and they want to bring the suffering to an end just like millions did with Apartheid South Africa.

The French Court of Cassation in Paris has refused to accept the legitimacy of the Palestinian BDS movement which was borne out of Israel’s colonisation and dispossession of the Palestinian people. Instead, the court agreed with the Zionist claim that BDS is a form of anti-Semitism.

Sitting listening to the High Court judgement were 12 political activists who had their convictions upheld for the ‘crime’ of advocating sanctions and a boycott against Israel as a means of ending the decades-long military occupation of Palestine.

The non-violent activists went to a supermarket wearing shirts with the slogan, “Long Live Palestine, boycott Israel” while handing out literature informing the public that, “Buying Israeli produce means legitimising crimes in Gaza”.

The ruling carries a prison sentence or a fine of up to PS30,000, and for many it makes a mockery of the “Je Suis Charlie” campaign, which saw more than a million take to the streets of Paris to defend the right to free speech earlier this year.

Israel has now turned to its friends in government to crack down on the highly effective BDS movement having failed miserably to win the hearts and minds of ordinary citizens around the world.

One of those at the front of the rally was Israeli Prime Minister Benjamin Netanyahu who joined others representing brutal regimes including Saudi Arabia and Egypt where being a journalist can turn out to be a life-threatening occupation.

The French judgement came too late to get a reaction from the Pakistani students, but not so Mick Napier, a founder of the Scottish Palestine Solidarity Campaign which has branches throughout Scotland to go with an expanding membership.

He said: “The BDS movement has been crystal clear from its launch that we oppose a system of Jewish ethnic and religious supremacy and not Jews as a population, just as hostility to white supremacy in South Africa was not based on enmity towards white people per se there or anywhere else.”

The tireless peace campaigner said the BDS effort had grown into a global entity in just over the decade since its formal launch to challenge the ability of the Israeli state to forever crush Palestinian aspirations to freedom by means of overwhelming violence. Napier added: “The various attacks on BDS from political and government elites are a sign of weakness on the part of the pro-Israel forces, not of strength.”

Napier also pointed out that only 200 metres from the Palais de Justice, where the French judges criminalised BDS political activity a few days ago, the Pont St Michel has a small plaque which reads: “In memory of the numerous Algerians killed during the bloody suppression of the peaceful demonstration on 17 October 1961.”

The ruling carries a prison sentence or a fine of up to PS30,000, and for many it makes a mockery of the “Je Suis Charlie” campaign, which saw more than a million take to the streets of Paris to defend the right to free speech.

“Hundreds of anti-colonial demonstrators were tortured and murdered by the Paris police, many of them thrown into the Seine to drown,” Napier continued. “The judges who made the anti-BDS judgement stand as part of a long tradition of suppressing outbreaks of solidarity between French citizens and colonial slaves.”

Celebrated journalist Glenn Greenwald was just as robust in his outrage at the French court’s decision. He described the post-Charlie Hebdo ‘free speech’ march as a fraud, led by many world leaders who imprison or even kill people for expressing prohibited views.

“The march took place in a country that is one of the most hostile to free speech rights in the West, as France quickly demonstrated in the days after the march by rounding up and prosecuting Muslims and other anti-Israel activists for the political views they expressed. The absurdity of France’s celebrating itself for free expression was vividly highlighted by [the anti-BDS] decision from that nation’s highest court, one that is a direct assault on basic free speech rights.”

It is hard not to agree with Greenwald when you consider France was just one of many Western nations which has promoted, supported and endorsed trade boycotts by way of sanctions on countries including Iran, Iraq and Russia in recent years. If it is OK for the state to enforce such boycotts why is it deemed a crime for French citizens to do the same?

Perhaps the proud boast of “Liberte, egalite, fraternite” should now have the word “hypocrisie” added as well in the interests of clarity.

Perhaps the proud boast of “Liberte, egalite, fraternite” should now have the word “hypocrisie” added as well in the interests of clarity.

One also has to wonder what the French Government expects the Palestinian people to do without the support of the BDS movement which came together after continual failures of the peace process and the absence of any effective proposals to contain Israel’s continuing persecution.

The BDS initiative in 2005 saw 170 Palestinian civil society organisations come together to call on their counterparts internationally to take action and boycott all things Israeli.

It was a heroic and peaceful response to decades of oppression, occupation, apartheid and colonisation. If France – and now possibly other allies of Israel follow suit – removes the Palestinians’ right to non-violent campaigning what do they think will happen?

With that sort of lily-livered response towards Apartheid South Africa, the late, great Nelson Mandela would’ve died on Robben Island, never having tasted freedom or gone on to become the world’s most admired and adored statesman.

Freedom of speech in France? Frankly, I’m lost for words.